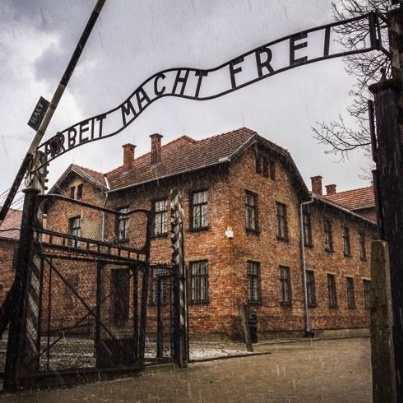 Dark Tourism is the practice of taking a touristic trip with the intention of visiting or seeing a place with a corrupt and tragic history, such as Chernobyl, Hiroshima or Berlin. Over recent years, the numbers of visits to tainted locations has massively increased. However, is it morally right to make money out of real life situations that had terrible real life consequences?

Auschwitz was a Nazi concentration camp during the Second World War where minority groups such as Jews were tortured, forced to do heavy labour and killed. It was liberated in 1945 and could be visited by the public almost immediately afterwards, but very limited numbers of people went. However, within the first 10 years of Auschwitz being a public memorial, there were more than a million visitors. In 2017, there were over 2 million visits to the museum, which is the highest number of recorded visitors. It now costs around £35 to enter.

Ground Zero is a memorial site in Manhattan, New York to remember the lives lost in the World Trade Centre bombing in 1993, which claimed six lives and the 9/11 bombings in 2001 that claimed 2600 lives. People travel there now and can pay for the “9/11 tour” and visit a shop to buy “9/11 merchandise”.  Although it is free to walk around the area, donations are expected and most people choose to visit Freedom Tower which has an entry fee.

There are, of course, a large number of varying opinions on dark tourism and potentially exploiting historical misfortune. Some people think it is a great idea, as it is a way to educate whilst making some money that tends to go towards the upkeep of the institution or a charity related to it. However, that isn’t always the case. Sometimes organisations can be insensitive and misleading, which can offensive to some people. They don’t always use the proceeds they earn for beneficial purposes and in a lot of cases it goes back to the government for other uses. The people who have been affected by any of these events could find this upsetting or unpleasant and dislike the idea of people capitalising on such a destructive incident. For people wanting to pay respects to a victim who doesn’t have a grave, it would be very distressing for them to have to visit a public memorial, perhaps only on certain days and even have to pay a fee for it.

Nevertheless, it’s a large and ever-growing industry and with the generations’ growing fascination with despair and horror, dark tourism has proved to be a profitable way to make money. Whilst it may not be deemed morally correct by some, people will always have some sort of obsession with the barbaric side of things and there will always be people willing to take the opportunity to take advantage of it.

So is it wrong? Or is it just human nature to find an interest in other people’s misfortune? Despite some people seeing it as inappropriate, arguably everybody has a layer of morbid curiosity to some extent and some are just more eager to satisfy it than others.