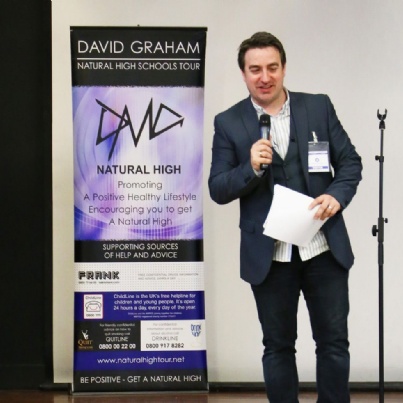 On the 6th of November 2017, a man called David Graham came into school to see year 7 to explain the importance of not taking drugs, not to do anything you will probably regret, not to drink until you are old enough, not to drink too much alcohol and not to do other things your friends might tell you to do it because apparently it is ‘cool’ but it probably isn’t.

He wanted everyone to find what made them happy and what gave them a natural high. The aim of this was to have fun and become high without taking drugs, which is an artificial/unnatural high.

He made the experience as fun as possible by including singing, dancing and competitions. He sang the song “Shine” and a song that he had created himself all about natural high. He had created actions to match the words of this song which we could join in with if we wanted to. He had two competitions, one was a sporting competition too, which involved three girls coming up onto the stage and showing off their skills by seeing how many kick-ups they could do in a row. He told us, before the girls started, that the highest ever number that someone completed at a school he visited was around 1100, which a huge amount. He told us the highest in a girl’s school was just under 200, which is also pretty impressive.

The girls had a go, the girls each had 5 turns each. The first girl got 8, the second got 2 and the third got 2 as well. Which isn’t quite as impressive as 200 or 1100 but they were brave enough to go onto the stage and have a go because that is pretty daunting, in front of that many people so they still got a prize.

The other competition was a mind competition which we had to write on a piece of paper a slogan to help us remember that drugs are wrong and that we should not take them. There was a girl in third place, a girl in second place and someone in first place, each of them also got prizes.
At the end David gave out a card to each girl which had information about all the helplines we could contact if we needed help. On this card, there was also a coupon for tenpin bowling which would get us a game for free if we had already bought another game which was there as an extra reason to keep the card.

It was an amazing experience, everyone was having fun and enjoying themselves, there was a fun atmosphere and even though it was serious David Graham managed to pass the message on in an enjoyable way.