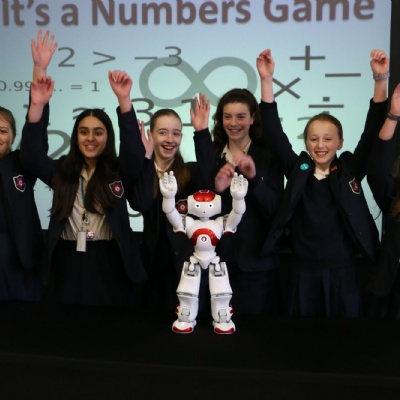 On Friday 16th March, Year 7 had the opportunity to watch a road show by representatives from BAE systems and the RAF.

The representatives taught us why maths is important and continued to prove this throughout the show through a range of experiments.

First, they showed us a robot called Mya who was programmed to act like a human e.g. greet people and dance. Next, they brought out a huge tube and told us to estimate which bucket (which were placed on some students’ heads) the metal ball would land in. Fortunately, they stopped the ball before it could do any damage! After that, one of the representatives showed us a card trick, where a chosen card would end up in the middle of the pile.

Then, they asked a volunteer to sort out some aircrafts so that the weight was equal on both sides of the ship. Afterwards, they showed us how face recognition works, and that you can’t use a photo to fool it.

Finally, they strapped a huge fan to a representative’s back and used it to try and blow cups off the volunteers’ heads, which they succeeded in.

Overall, it was a brilliant show and I’m sure everyone enjoyed it and had lots of fun.